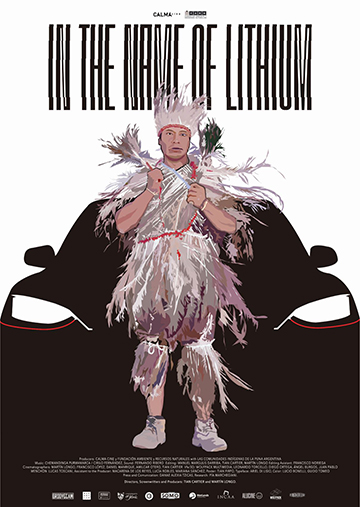 Synopsis: Clemente Flores lives in the community "El Moreno", in Salinas Grandes, Jujuy, where more than 30 indigenous communities struggle to prevent the imminent arrival of multinational mining companies to extract lithium, the new white gold. In search of answers to his silent claim to be included in the decision-making process, Clemente embarks on a revealing journey, to return and organize, together with the other salt communities, a resistance action in defense of their territory . "In the name of lithium" is a documentary about the urgency of reaching an equilibrium with the Pachamama.

“Water is the blood of the Pachamama”.

“In the name of Lithium” is a documentary about the struggle of the indigenous communities of the north Argentina to prevent its salt flats, containing one of the largest lithium reserves in theworld, become a «sacrifice zone» in order to reduce global warming.

Two worldviews confront in the north of Argentina. On the one hand, the original communities of the salars in their fight to defend their traditions and the ecosystem. And, on the other, the contemporary world in its desperate need to find in lithium, an alternative to oil, and be able to store renewable energy, without questioning its extracting methods.

The outcome for the communities is unfavorable: they are not taken into account in decision-making, nor in operating profits. And the political-economic, national and international interests are increasingly fierce. The total colonization of their salt flats seems inevitable, and their traditions seem to be condemned to extintc in order to «save» the world.

of the world reserves of lithium are inArgentina, Bolivia and Chile.

litres of water are used to produce 1 Ton of Lithium Carbonate. (1)

of the exports of Lithium Carbonate goes to the United States

Projects are actively extracting and exporting.

“They came and said, “We are going to extract lithium”. But, what about the communities? Do we exist?”.
Show More

“There was a big change, people want to come because there is work”.
Show More

“I give my life for the salars”.
Show More

«In the name of lithium» is produced by Calma Cine and Farn, directed by Tian Cartier and Martín Longo; and Pía Marchegiani as Director of Farn’s research team.

It has the support of the National Institute of Cinema and Audiovisual Arts and Cultural Patronage of the Ministry of Culture of the Government of the City of Buenos Aires. (See more button)

For the indigenous communities of the salt flats of the Argentine Puna, salt is rooted in the deepest part of their identity, in the inheritance of their ancestors and the fight for their territory. Salt is not a resource, but a living being, which has its own life cycles and must be respected.

Publicaciones 1 a 3
Between lithium and life: native communities and the struggle for the conservation of water and their culture.
Show PDF
The essential environmental view in decision-making on lithium.
Show PDF
Lithium in the Argentine and Bolivian Puna.
Show PDF
Publicaciones 4 a 6
Not everything that glitters is lithium.
Show PDF
Lithium extraction in Argentina: a case study on social and environmental impacts.
Show PDF
A long resistance and the right of self-determination of the communities from Salinas Grandes.
Show PDF
Publicaciones 7 a 9
The other side of lithium: water and the right to consultation.
Show PDF
-Kachi Yupi. Huellas de Sal: consultation procedure and prior, free and informed consent for the indigenous communities of the Salinas Grandes and Laguna de Guayatayoc.
Show PDF
30-year mining development plan: leave everything the same so that nothing changes?
Show PDF
Publicaciones 10 a 12
General regional study of water resources and their eventual impact due to lithium mining and related substances, in two areas of Puna Jujeña and Salteña.
Show PDF
Study of water resources and the impact of lithium mining exploitation.
Show PDF
The moment of lithium: it is time to ask yourself the right questions.
Show PDF
Anterior
Siguiente